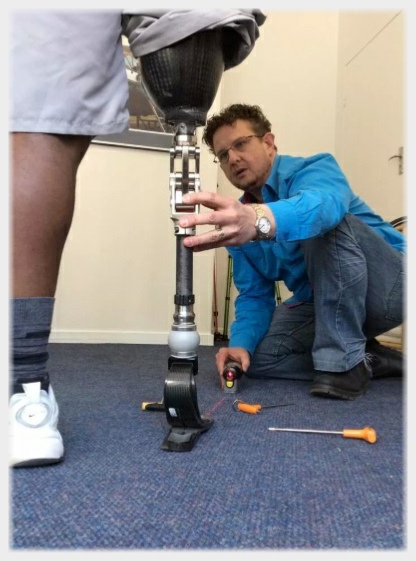 What is the use of having an artificial limb if you are unable to use it? Rehabilitation forms an integral part of receiving a prosthesis from our facility. The rehabilitation starts during the trial and test fitting stages and continues after the prosthesis is completed.

During the therapy sessions the prosthetist monitors the fit and function of the artificial limb. This accelerates the rehabilitation process as any problem areas are identified and dealt with quickly.

Once a lower limb amputee has been rehabilitated on their prosthesis and has had some time to get used to walking, they are encouraged to participate in an advanced rehabilitation regime to enable them to get the most out of their prosthesis. This may be by being able to participate in sport or just being able to feel more confident walking on uneven surfaces. Whatever the amputee's activity level, there is always room for improvement. Lynda is the physiotherapist who is responsible for the rehabilitation of our lower limb amputees.